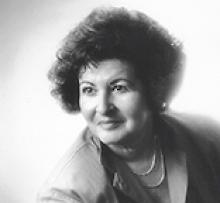 Debby graduated from the University of Manitoba’s Interior Design program with a Bachelor Degree in 1950 and was a pioneer in interior design. Debby’s resume noted that she was “the First Interior Design Graduate, with a BID, hired by an architecture firm in Winnipeg and probably Canada”.

In addition to having an extensive career as practicing designer, Debby was also an unwavering supporter of the profession. Debby was a director of the PIDIM trade shows and the Design Management Centre at the University of Manitoba. She was Executive Director of the Manitoba Design Institute and Organized, the inaugural Premier’s Award for Design Excellence. As a volunteer for NCIDQ, she represented IDC and helped develop the new format of the NCIDQ Exam.

Debby was a force of nature and her personality was legendary. Famous for her style and her unwavering support for the profession, she was a personal cheerleader for many graduates of the U of M, following careers and never failing to acknowledge professional achievements with a handwritten note. Her wry sense of humour and no-nonsense attitude were both intimidating and inspiring, as the situation required. I was fortunate to be a beneficiary of her guidance and mentorship.

Debby had a unique personality, no-nonsense and straightforward without embellishment, which failed to hide her warm heart. I have a personal Debby anecdote. Several decades ago, she and her husband, Easton, designed and built a Modernist house for themselves in Winnipeg. As an architect and a designer, they poured their souls into this house. When it was finally finished, Debby decided to visit one of her children in Vancouver. On arrival, she walked out onto her balcony, took in the city and the ocean spread out before her and sent a telegram to Easton, containing two words – “Sell house”.

Truly an icon of the profession, Debby helped to lay the foundation for generations of designers.