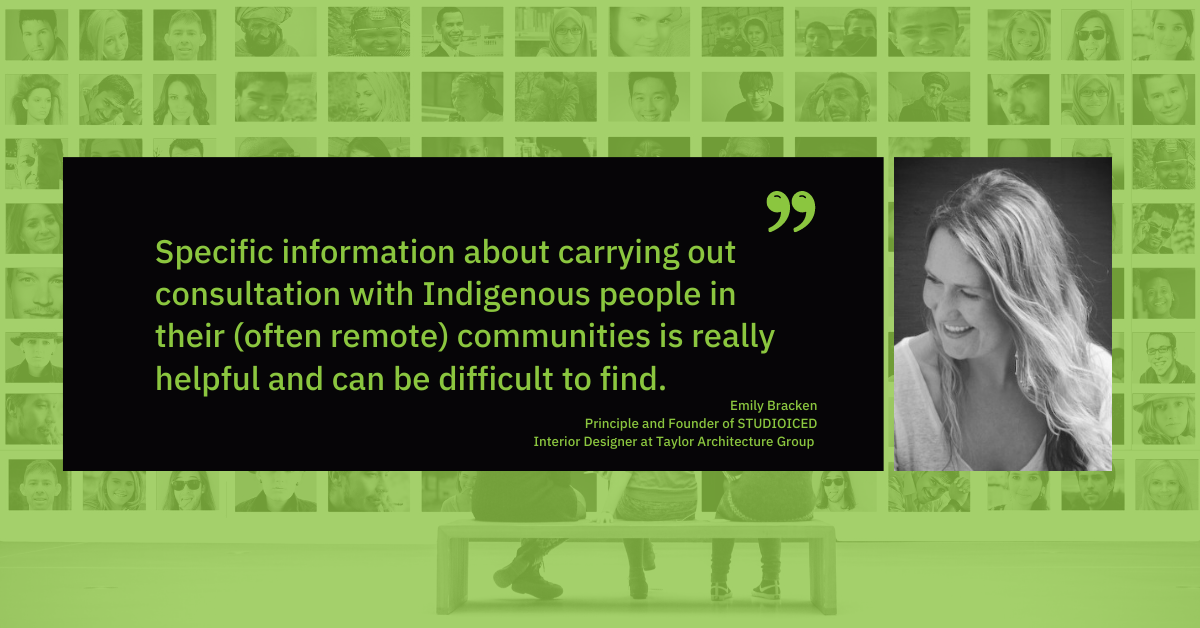 IDC: How long have you worked as an interior designer and where did you get your start?

Emily Bracken: I’m Irish, and studied ‘Design in Interior Architecture’ at the Institute of Technology in Sligo, Ireland. I got my first full time job working as an Autocad technician for a multi-disciplinary firm in Sligo. There wasn’t much interior design work where I lived, and I didn’t want to move to a big city as I was having a great time camping, surfing, and hiking on the west coast.

IDC: Tell us a little bit about your journey to now living and working as a designer in Yellowknife?

EB: When the Irish economy crashed in 2009 the entire construction industry collapsed. My office closed down. My partner also worked in construction, as a structural engineer, and he was unable to find work after a year off travelling. We decided to move to Canada for work. Vancouver was rated the best city in the world to live in 2010, and we had done a lot of travelling but neither of us had been to Canada yet. We loved Vancouver, but it was difficult to find work, and when my partner found a job in Yellowknife, we thought it would be a great adventure so we moved here in November 2010. Our Vancouver friends thought we were crazy and sent us off with boxes of groceries in case there was nothing there.

IDC: What are some of the benefits and challenges of working in the Northwest Territories?

EB: We found a really vibrant, interesting community with well stocked stores, houseboats on the frozen lake, a snow castle, and people who love the outdoors as much as we do. Within weeks, I also had a job as a junior interior designer in FSC Architecture. It was amazing to find great jobs so quickly here, and we immediately started working on interesting and diverse projects all over the north- in the Yukon, Northwest Territories and Nunavut. It was a real baptism of fire! As a designer, I found the first couple of years very challenging but very rewarding too. I was learning on the job, learning Canadian terms for everything construction related, using imperial measurements as well as metric (which is standard in Ireland) and learning about all the diverse Indigenous people and their cultures in the north. There are regional differences in language and culture throughout the north. I also studied for, and passed the exams for NCIDQ in late 2016.

IDC: What kind of documentation or guidelines are available to create culturally sensitive spaces in the north?

The duty to consult with aboriginal groups is part of the Canadian Constitution Act 1867, although this intended primarily for government actions which may adversely affect Aboriginal or Treaty rights. Off the back of this there are several guides for consulting with communities in the north which are aimed at the mineral exploration and mining sector or for planning and managing territorial parks and special places. The “Culturally-Appropriate Consultation Techniques” guide was sent to me a while ago. I found a lot of great information which is relevant for consulting with any end-user in here. Specific information about carrying out consultation with Indigenous people in their (often remote) communities is really helpful and can be difficult to find.

IDC: You mentioned that Harriet Burdett-Moulton was a former mentor. What kind of impact has she had on your own design work or research?

EB: Harriet worked in the firm where I got my first job in the north, FSC Architecture and Engineering. She is a Metis architect and Fellow of the Royal Architectural Institute of Canada. Harriet was a great mentor in my early years working in the north. She taught me so much in terms of her putting the end user first, doing research and gathering information, and carrying out in person consultation in order to design for peoples very specific cultural and technical needs in communities all over the north. Harriet has designed some beautiful landmark buildings and I was very lucky to work with her in those years. She still works with the same company, which became Stantec in 2011, and is now based in Nova Scotia and I’ve been working with local firm Taylor Architecture Group since 2019.

Emily is currently an interior designer with Taylor Architecture Group and is also the Principal and Founder of STUDIOICED. Connect with Emily on LinkedIn.